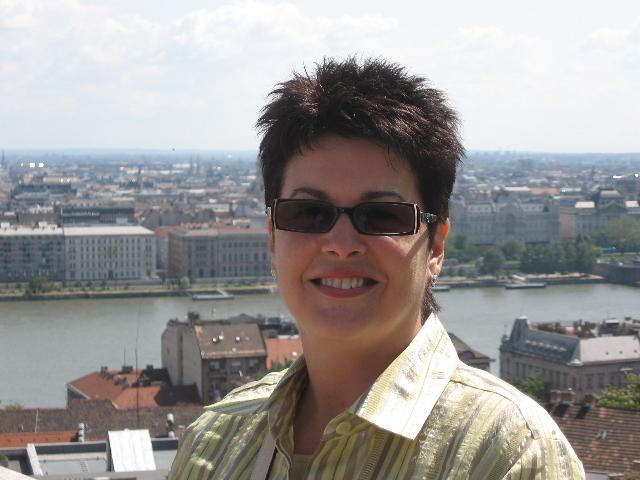 Welcome to our Cruise up the Danube River on the Amacello Luxury River Boat!  Yes kids, Mom and I are out gallivanting in Europe with our co-adventurers, the “Smiths” on a cruise that starts in Hungary and takes us up the Danube river to Slovakia, Austria, Germany, and the Czech Republic.  Hey, Czech out Mom’s new hair style! 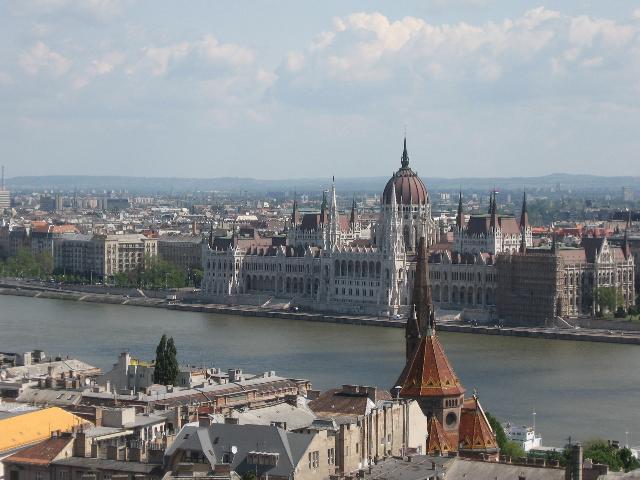 We started in Budapest, Hungary for a little history lesson.  Hungary has a history of conquering and well as being conquered.  It started with the Romans who liked the country for its wealth of hot springs and ended most recently with the occupation by Nazi Germany and then the Soviet Union.  Seems that while uniting with Austria in the late 1800’s brought great wealth to Hungary, it also made them the aggressor in WWI. Unfortunately this initiated the cascade that lead them to occupation by the Soviets.  When WWII was starting, Hungary was still stinging from the loss of 72% of its territory at the end of WWI, so the Hungarian’s signed a treaty with the Nazi’s in hopes of avoiding the loss of additional territory to the Germans.  Bad choice.  Not only did the Nazi’s occupy Hungary and kill hundreds of thousands of Hungarian Jews, but the territory was “given” to Soviet Russia as part of the treaty at the end of WWII.  Hungary has spent its time since the fall of the Iron Curtain catching up with the rest of the world. 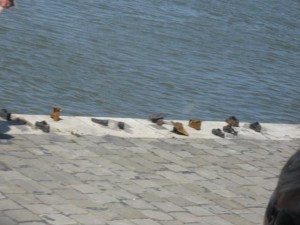 In addition to preserved historical sites such as Hero’s Square, the Royal Palace, and Parliament, we also saw the ugly WWII and Communist parts of Hungary that included the House of Terror (where Nazi’s and then the KGB tortured Hungarians thought to be spys), and the “Shoe Memorial” (bronze shoes on the bank of the Danube, commemorating the thousands of Jews that were marched to the river, forced to remove their shoes, and then shot so they would fall into the Danube and be washed down the river.) 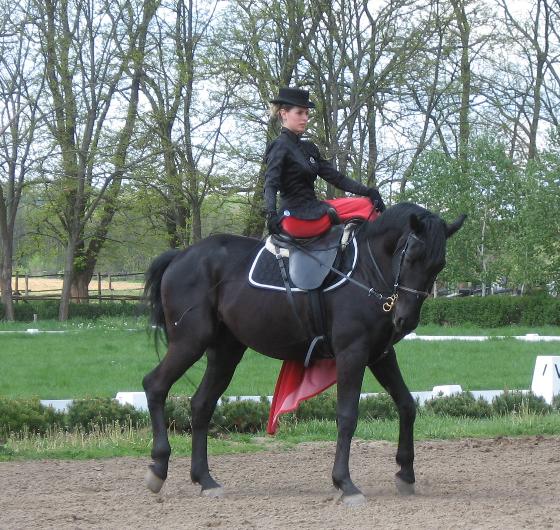 The second day in Hungary was much more fun as we were bussed to a Hungarian ranch where we watched “Hungarian Cowboys” show us their best horse tricks, horseback archery, and skill with whips.  Mom liked the whips.  It turns out that the cowfolks actually come from Romania as their culture really has not changed much in the last 100 years.  Obviously Communism did nothing for Romanians either. 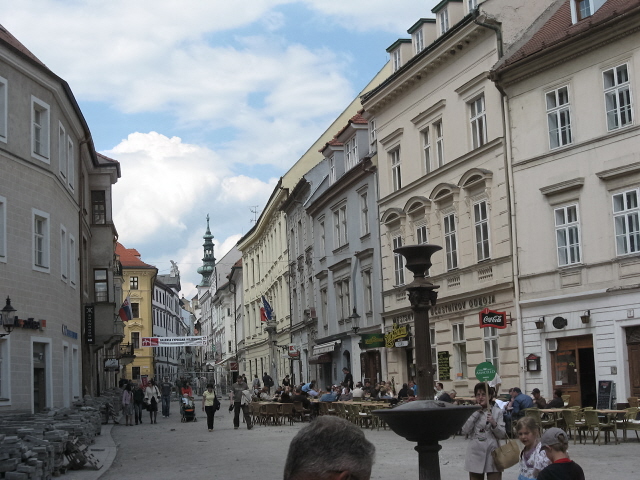 From Hungary, we sailed to Bratislava, Slovakia.  It sounds like the Slovakia was always part of another country, such as Austria, Hungary, Czech Republic and the Soviet Union.  It is finally enjoying its own independence. Like Hungary, the Slovakia suffered greatly after WWII as part of the Soviet Union.  It is coming around even slower than Hungary.  As you can see from the picture, Bratislava is still repairing its roads and buildings nearly 20 years after the fall of the Iron Curtain. 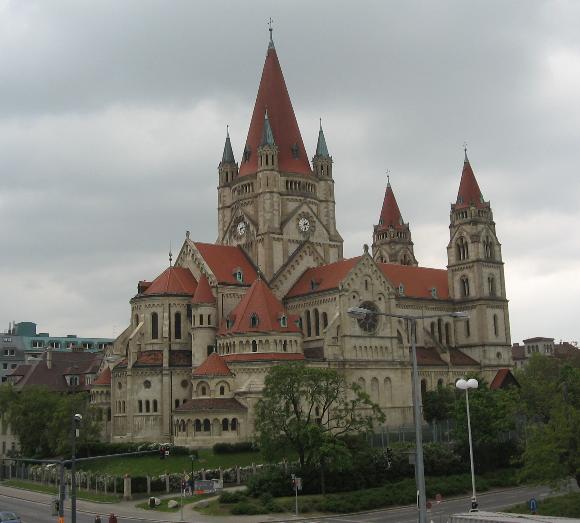 We then sailed up the Danube to Austria and stopped at Vienna.  Vienna is the home of the Hapsberg’s, classical music, etc.  Austria has done much better than Hungary and the Slovakia since WWII.  I wonder if it had anything to do with the fact that Austria was spared from becoming part of the Soviet Union?  Austria is a beautiful mix of the old and the new.  Pictured to the left is the Cathedral of St. Francis Asisi which was built for the last Emperor (Franz Josef) of Austria to commemorate his 50th anniversary as Emperor. 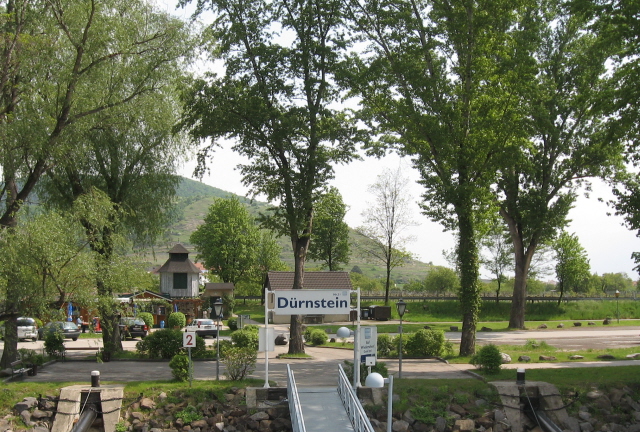 Next up the Danube came Durnstein which is a tiny medieval town on the banks of the Danube in Austria noted for its white wine and apricot liquors.  The town itself has less than 1000 inhabitants whose major industry is tourism.  Central to the town is the Monestary with a beautiful cathedral. 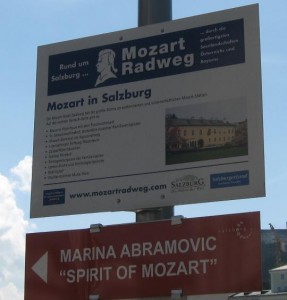 We couldn’t leave Austria without visiting the towns made famous by the von Trapp family and the Sound of Music.  These are beautiful Bavarian-like towns of Salzburg and Monsee.  Monsee is the lake town where most of the movie was filmed and Salzburg is where the garden scenes were shot.  Salzburg (in ancient times known for its salt “salz” mining) is also known as the birthplace of the famous such as Doppler and Mozart, and is the home of the most famous musical university in the world, the University of Salzberg. 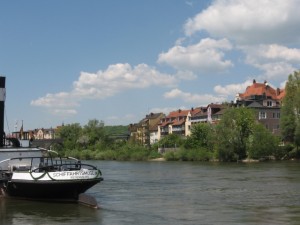 Our next stop was Regensburg in Germany.  Regensburg is one of the oldest cities in Europe, as its origins date back to the Stone Age.  It is a perfectly preserved medieval city complete with “family” towers and St. Peter’s Cathedral in the center of town.  The great stone bridge across the Danube built in the mid 1100’s was important in connecting Venice to merchants in Northern Europe. 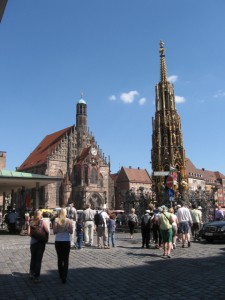 From Regensburg, we sailed across the “Continental Divide”. Using locks, we climbed over 300 feet in elevation! to Nuremberg. The city was the home of the Nuremberg trials of the WWII war crimes. The history of the city dates back to the stone age and in medieval times became an important trade city.  Unfortunately most of the city was completely destroyed in 90 minutes during WWII, but was rebuilt using much of the original stone.  Today Nuremburg is a flourishing city known for its craftsmen and markets.  This is a picture of the Marienkirche Church and famous “Gold Fountain” in Nuremburg’s main square. 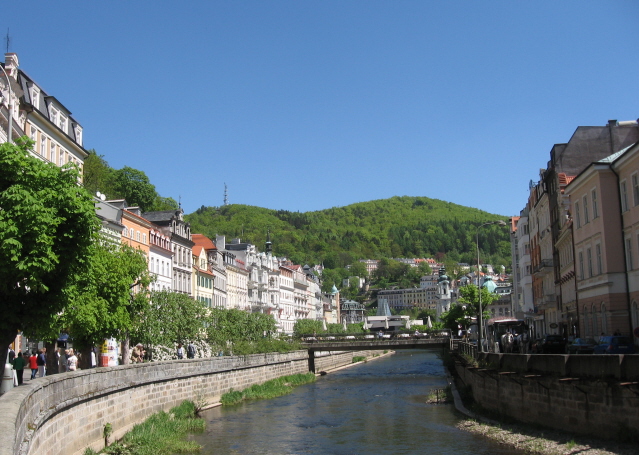 From Nuremburg we left the ship and were bused into the Czech Republic where we visited Carlsbad (know as Karlovy Vary) and Prague.  Carlsbad is a beautiful spa city with great restaurants, gorgeous medieval architecture, and of course, attractive people.  With many natural heated springs there are many luxurious spas to relax in as well as the Pupp Hotel for upper crust accommodations.  Definitely deserves a return visit… once the dollar gains a little more value that is. 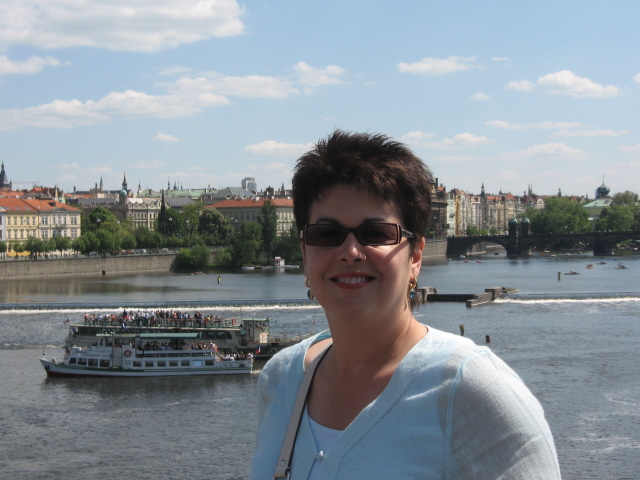 Our last stop on the trip was Prague.  Definitely one of our favorite cities (Notice Mom’s smile?)!  It’s situated on the river Vltava (no, I can’t pronounce it either) and is the capital of the Czech republic.  It is found in the region known as Central Bohemia, and embodies every connotation associated with the word “Bohemian”.  It escaped the vast devastation that many European countries suffered in WWII so it is rich in the old style architecture of Europe, as well as in musical, literary, and artistic culture.  Throw in the great restaurants, an easy metro system, and a quaint Harley Dealership, …what’s not to love?  And Tony, not a bad place to shop for a wife (wink, wink).

Here are a few more pictures and stories.  Either click on the “slideshow” or arrow down to page through the pictures one at a time.  Enjoy and don’t forget to drop us a line in the Guestbook!