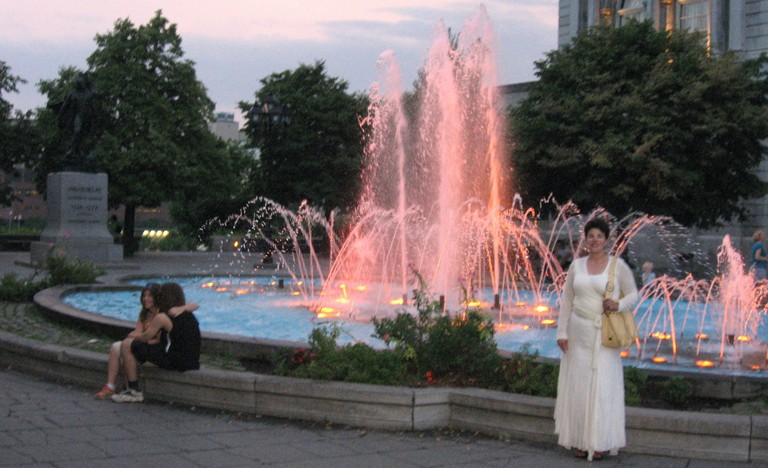 Montreal is the city where charm and quaintness were first imported to North America.  We spent most of our time in “Old Montreal” which was settled in the 1600’s as a port and shipping city.  We stayed at a great old hotel “Auberge du Vieux Port” (www.aubergeduvieuxport.com).

As walking has become a family tradition that we somehow inherited from our kids (remember Thanksgiving, 2003?), Joan and I spent most of our time sightseeing in this wonderful part of town.  We also walked around 6 miles round-trip to the cross at the top of Parc du Mont Royal, which is just behind Mc Gill University and UP HILL!

The cross at the top of Parc Mont Royal is at the top of the hill in the park.  Most of the park is shaded, and you end up walking up more that 200 steps to get to the cross.  Three quarters of the way there you come to a tremendous chateau, where you can get refreshments and take in the scenery of Montreal.  We finally made it to the cross, but we did not see any of the fabled wheelchairs or canes said to have been left there by folks who had there prayers answered.

We were told that Montreal bagels are the best, so being New Yorkers we had to try one to see.  Joan and I walked about 5 miles round-trip to try a bagel at St. Viateur Bagel Shop and Cafe.  It was a lovely walk through the Latin and Gay sections of Montreal and while the bagel sandwiches were good, New York bagels are still the reigning champions of the world to Joan and me.

We went to mass at the Chapel of Notre-Dame-du-Bon-Secours which is the first Catholic Church built in Montreal back in 1655.  It is known as the “Sailor’s Church” as it overlooks the Saint Laurence River and was attended by much of the sailing population of Montreal.  It is a beautiful church and well preserved.

Our best dinner was at La Marée.  It is right on the plaza by the hotel. The next best restaurant was Modavia where the food was pretty good and the live Jazz trio was very good.  Les Pyrénées was a cute restaurant with a great Mojito.

Here are a few more pictures and stories from Old Montreal.  Either click on the “slideshow” or arrow down to page through the pictures one at a time.  Enjoy and don’t forget to drop us a line in the Guestbook!  Also, you don’t want to miss the pictures from the Royal Canadian Pacific Train Ride which follow directly after this photo album. 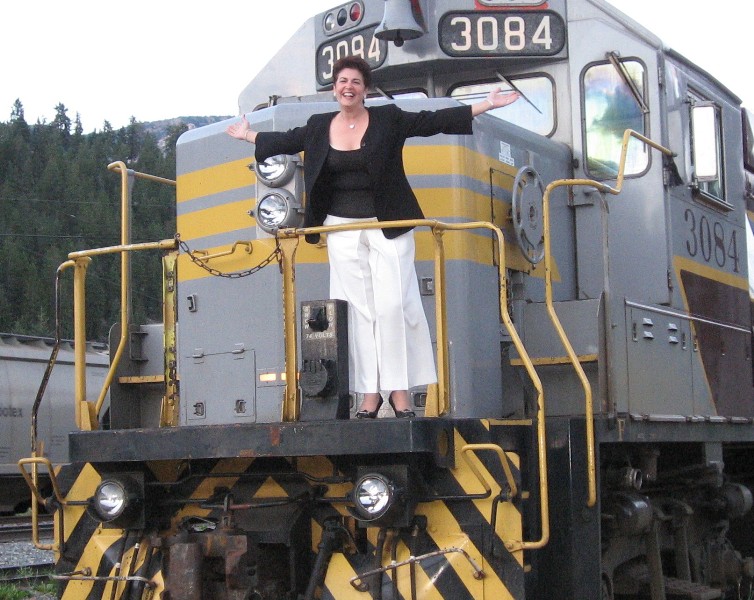 We are arrived in Calgary where we would meet our train.  We stayed at the Fairmont Pallister Hotel overnight and caught the train in the morning.  The train is called the Royal Canadian Pacific (www.royalcanadianpacific.com) which is a renovated ten car train whose cars were originally used in the 1920’s.  The train has been used to tour dignitaries and movie stars around the Canadian Rockies.  This was definitely a luxurious train ride with gourmet meals and wonderful wine.  The scenery from the train was unbelievable, but our fellow passengers were even better!

On our first day of the tour we went to a Fairmont Hotel in Banff called the Fairmont Banff Springs Hotel.  This is an incredible hotel nestled in the Canadian Rockies, aptly nicknamed the “Castle in the Rockies”.  We then traveled by train to the Fairmont Chateau Lake Louise.  The hotel overlooks Lake Louise, which is a glacial lake, at over one mile above sea level.  Both hotels are gorgeous and either would be a neat place to celebrate Christmas.

The second day of our tour started with breakfast at the top of Kicking Horse Mountain in the Rockies.  This is a smaller ski resort (60,000 skiers/season) also just over a mile above sea level.  On a clear day, you can see for ever.  The trails at the top of the mountain were nearly all black diamonds.  Kicking Horse was named after an incident that occurred in the early days when the pass was used as a commercial route through the Rockies.  It seems that as the pack leader and a few Indian guides were returning to the trail with a couple of horses that broke away, the pack leader was knocked unconscious when one of the horses kicked him in the head.  The Indian guides assuming that he was dead prepared a funeral pyor for there fallen leader.  As they placed the pack leader on the pyor he came to and scared the crap out of the Indians, who believing that this was a miracle, named the mountain where this occurred “Kicking Horse”.  Kicking Horse is also a Brown Bear sanctuary that takes care of a 3 year old orphaned bear named Boo.  Later that day, we toured “Trans Delux at The Canadian Museum of Rail Travel” (www.trainsdelux.com) which is a railroad museum that is painstakingly renovating trains from as early as the late 1800’s.  The interior of the trains were entirely furnished in mahogany with beautiful inlays.  Through the years cigarette and tobacco smoke as well as the natural environment, had turned the varnish completely black.  If that were not bad enough, rather that restore the wood in the 1950’s, they railroad just painted everything a delightful artichoke green!  Now artisans are removing coats of paint to get to the wood below.

Day three brought us to a Black Foot Indian reservation called “Head smashed-in Buffalo Jump” or just “Head smashed-in” for short.  There we witnessed demonstrations of authentic Blackfoot Indian dance and music and heard the story behind the name.  Head Smashed-in is located in the plains of British Columbia and the Indians, prior to the arrival of the horse and guns had a tough time surviving the tough,long winters of the plains.  Somehow a bright Black Foot came up with an idea that if they can chase a herd of buffalo over a nearby cliff every fall, they will surely have all the food, clothing, and shelter they will need to get through the winter.  Thus came the name of the pass and canyon where the Indians tricked herds of buffalo to there death.

We went horseback riding on the last day of the tour at the foothills of the Canadian Rockies at Homeplace Ranch (www.homeplaceranch.com).  The ranch was established in 1912 by the great grandfather of Mack MaKenny.  The ranch has been in the outfitting business for three generations.  Mack and his staff were great instructors and guides.  After a beautiful trail ride, we enjoyed a delicious barbecue before we headed back to Calgary and the trip home.

Here are a few more pictures and stories.  Either click on the “slideshow” or arrow down to page through the pictures one at a time.  Enjoy and don’t forget to drop us a line in the Guestbook!