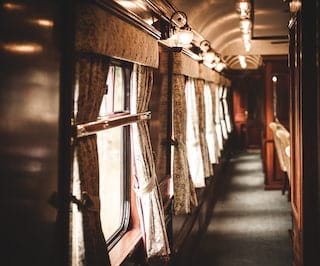 Mom and I are headed to Edinburgh, Scotland to catch the Belmond Royal Scotsman train for a five-night journey exploring the wild and rugged west coast of Scotland, including Oban and the Isles of Mull and Bute. The train ranks among the world’s most luxurious trains, with ten mahogany-clad cars containing 15 twin, three double, and four single state cabins, as well as an observation car, two dining cars and the sublime Bamford Spa. Should be a great time! 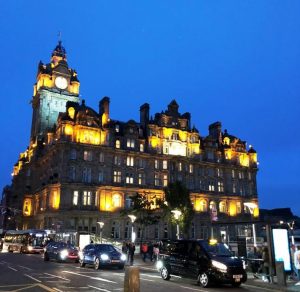 Day 1 – We’re staying at the beautiful and luxurious Balmoral Hotel in Edinburgh. Last night, after a couple of drinks (first taste of scotch, Balvenie 30 year!) we had dinner at the new Hawksmoor restaurant (located in an old Bank of Scotland building) with a bottle of 1998 Cab Sav/Merlot/Cab franc blend and a brisk walk around Edinburgh. This morning we boarded the train at the Edinburgh Waverly Station in the late morning after a pleasant evening at the Balmoral hotel and left Edinburgh in the afternoon headed west past Loch Lomond and the beautiful Rannoch Moor forest headed to Spean Bridge, known as the “crossroads of the Highlands”. 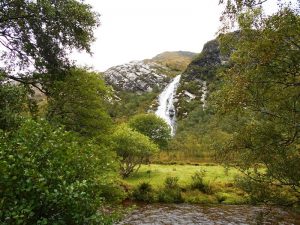 Day 2 – The train headed to the pretty village of Arisaig.  On the way, we passed Ben Nevis, the highest mountain in the British Isles. The train stopped at the Silver Sands of Morar with soft white sand beaches and breathtaking views. After lunch, we hiked through Glen Nevis to the Steall Waterfall with our trusty mountain guides.  We spent the night at Taynuilt. 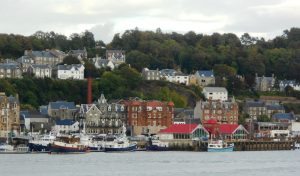 Day 3 – The day I was waiting for. Today we visited the town of Oban (pronounced “Obin”), gateway to the Hebridean islands and toured the distillery of one of my favorite single-malt scotches, Oban.  From Oban, we crossed to the Isle of Mull and visited the spectacular Duart Castle located on a high crag jutting into the Sound of Mull. The castle dates from the 13th century, modified over time by the Macleans of Duart and then completely restored to its original glory in the early 20th century. We had a wonderful sumptuous formal dinner back at the train as the train traveled to Wemyss Bay. 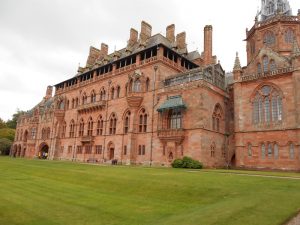 Day 4 – After breakfast, the train took us from Wemyss Bay to the Isle of Bute where we visited one of Britain’s most astonishing Victorian Gothic houses, Mount Stuart House. Designed by the 3rd Marquess of Brute and his architect, Sir Robert Anderson, the extravagant mansion boasts the Marquess’ passion for art, heraldry, astrology, mythology, and religion.  The mansion is surrounded by expansive landscaped gardens and wild forests. 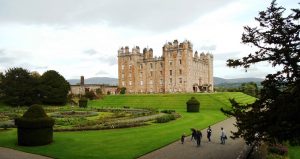 Day 5 – We left Sterling early in the morning today through Carlisle to Sanquhar where we visited Drumlanrig Castle, which is the Dumfriesshire home of the Duke and Dutchess of Buccleuch and Queensberry.  The castle is a turreted sandstone mansion with sweeping views over the Nith Valley.  This castle is the home of important collections of silver, porcelain, French furniture and art.  The castle is surrounded by 90,000 acres of lavish formal gardens, rambling woodlands and miles of footpaths. Back at the train, we enjoyed a phenomenal formal dinner and some Scottish dancing. 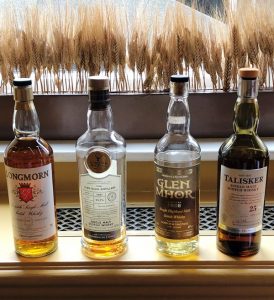 Day 6 – We bid our train and our new friends farewell, and headed back to the Balmoral Hotel. After a quick lunch, we headed to the hotel’s scotch bar for a tasting of “Rare and Unique” scotches with our trusty scotch connoisseur, Scott (Yep, Scott the Scot, served us scotch). The Longmorn is a 48 year old scotch (48 years in oak!) that was just DANGEROUSLY smooth. The Glen Elgin was a 20 year single cask baby at full cask strength of 55.7% (that’s 111.4 proof! Definitely needed a few drops of water but opened up beautifully). The Glen Mohr (31 year) is unique as the distillery was demolished in 1983 so this bottle is it! The Talisker is a 25 year scotch and a great example of how the peat flavor becomes completely integrated in the scotch over time. 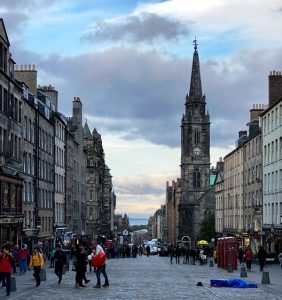 Day 7 – Mom and I decided to take a full day to do a little site seeing around Edinburgh. We got on the “Hop On, Hop Off” site-seeing bus which took us down some lovely streets like High Street, but hopped off at the Edinburgh Castle. What an incredible castle! There was so much to see that we only made it to the Military Museum and the Crown Jewels exhibit. I never knew that Scotland had such a long military history and how highly regarded their military has been throughout history. Unfortunately, photos were not allowed in the museums so not much to show.  Well tomorrow morning we head back home.  What a great experience and trip.  We’re definitely coming back to see more of Scotland…but need to dry out our livers first.